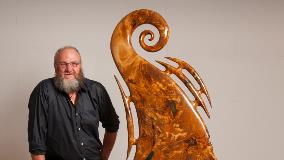 An installation of artworks by internationally-recognised Waikato district artist, wood sculptor and carver, Wayne Ross, is on public display in the Waikato District Council’s reception foyer from now until the end of July. The installation is part of the Council’s local Matariki Festival events and it focuses on one of the festival’s five themes: Mahi Toi (the arts).

Tony Whittaker, Waikato District Council’s General Manager, Strategy and Support, says hosting a display of Wayne’s work as part of local Matariki festival events is a great opportunity to showcase how it celebrates the traditional Maaori framework of Matariki.

Ngaruawahia-based Wayne creates freeform bowls and an extensive range of freestanding sculptures and dynamic wall hangings, all made from native wood (including ancient Waikato swamp kauri). In creating his pieces, Wayne says has never destroyed a living tree to fulfil his artistic ambitions and he works with natural edges which he regards as nature’s expressions. 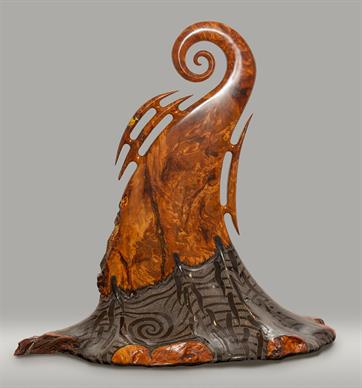 “I work alongside nature, who I regard as the ‘true’ artist,” Wayne emphasises. “My work has evolved from my travels throughout New Zealand, giving me a love for the bush, the wilderness in out of the way places and a deep respect for our environment. “

The artworks he’s chosen for the installation also link his design philosophy, with Maaori culture being one of several of the world’s earliest cultures which inspire his work. “I see where they have left their unmistakable fingerprints of nature in their arts.”

Photo: Wayne Ross with his sculpture, Inanga,  which is on display in the Waikato District Council’s foyer during Matariki.