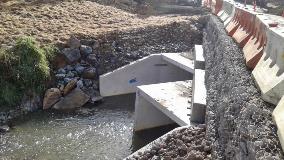 Waikato District Alliance, a joint venture between Downer New Zealand and Waikato District Council, has won a best practice award for its work on the Rotowaro culvert replacement.

The Alliance were presented joint winners in the small site category for the team’s proactive approach to erosion and sediment control on “difficult and rapidly changing sites during the construction of culvert structures”.

The regional council also congratulated the Alliance on their proactive approach and great communication with them during the construction. They were also thanked for keeping the environmental impact of the work to a minimum.

Waikato District Alliance Manager Doug Carrasco said it was pleasing to see such a collaborative project get the recognition it deserved.

The project was pulled together very quickly in April due to the key work needed on the culvert. The tricky environment and the fact Rotowaro Road is a rural road meant the local community were affected by a lengthy detour.

“In accepting this award we want to thank everyone, especially the community, for their efforts and understanding while we completed this work,” Mr Carrasco says.

Waikato Regional Council say the number of entries and nominations in this year’s awards reflected the wide range of different projects being undertaken across the Waikato region from small scale permitted activities to large scale roading projects. They illustrated the high current level of environmental awareness in the industry.