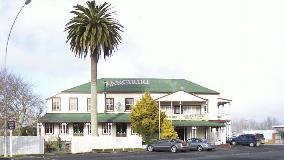 There is a wealth of historical buildings and structures in the Waikato district according to the heritage consultant who is reviewing our ‘built heritage’ as part of a wider District Plan review.

Dr Ann McEwan of Hamilton-based Heritage Consultancy Services is a Professional Teaching Fellow in Architecture and Planning at the University of Auckland.  She says, “Waikato district has a diverse range of fascinating heritage buildings on its built heritage schedule from a nationally significant milking shed to a landmark pub at Rangiriri and a World War II defensive structure near Raglan.”

The milking shed is none other than the first herringbone cowshed that revolutionised farming practice around the world. It was built in 1952 by Gordonton farmer and inventor Ron Sharp, to relieve his back and knees from having to stoop an estimated 2,400 times for every cow he milked during the milking season – or 240,000 times for a then-large 100-cow herd.

Inspired by the angle parking once available for cars all the way down Hamilton’s Victoria St, Ron ‘angle parked’ his cows on a platform with their udders within easy reach.  It saved him about 225km of walking each dairy season, and meant he could handle up to 90 cows an hour compared with 30. It also facilitated the expansion of the dairy industry, enabling farmers to manage herds three to four times larger than before.

With beer being the traditional tipple for the New Zealand working man, it’s no surprise that pubs and hotels are numbered among our heritage buildings, says Dr McEwan.
These include the Rangiriri Tavern, which has been a hostelry site since 1869.  Rebuilt in circa 1905, after the first hotel burnt down, it’s just a stone’s throw from the site of some of the fiercest fighting in the New Zealand land wars – and some claim it’s haunted by the wife of the original proprietor.

Not only did the land wars leave us a heritage of battle sites and soldiers’ monuments, but World War II saw the construction of an intriguing concrete road block that flanks Old Mountain Road at Waitetuna. Waikato’s version of Stonehenge is actually a tank trap built by the Home Guard to prevent enemy tanks from reaching Hamilton after a seaborne landing at Raglan.

Every social movement that has guided our district’s settlement and development has left its mark among our historic buildings.  Churches and schools predominate and include the Gothic Revival style Christ Church at Taupiri (1904), St Mary’s Pokeno that opened in 1900 with bells and stained glass from London, and the original late Victorian Tamahere school building that dates from 1884. The Plunket movement contributed the Raglan Plunket Rooms, built in 1948 and still in use today.

Interwar civic and commercial heritage buildings that feature on the district plan include Huntly retailer Les Kosoof and Sons (now L Kosoof Ltd) and the neoclassical Tuakau Memorial Town Hall. And then there are historic family homes ranging from the beautiful 1870s two-storey Woodlands homestead in Gordonton to the little rows of railway cottages in Ngaruawahia and Huntly.

Dr McEwan says there are currently 143 buildings and structures on the built heritage schedule in the District Plan and others have recently been identified for possible inclusion, through the Tuakau and Ngaruawahia structure plan reports and by members of the district’s heritage forum.

In recognition of our heritage, the Waikato District Council provides the Heritage Assistance Fund to assist with the conservation, restoration and protection of listed heritage items within the district that are not council-owned.  The funding is available on a three-yearly cycle and will be open to applications for the next round of funding in November this year.