‘Tiny library’ designed to stimulate a sense of community 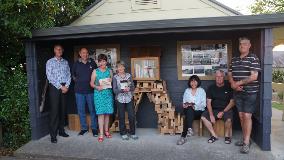 Pokeno’s new ‘tiny library’ was unveiled this week on a site chosen by the community in the middle of the village between the Pokeno Community Hall and the old post office.

Pokeno Community Committee chair Helen Clotworthy says, “It’s designed to help people to enjoy our village and to spark off other ideas among our residents on how we can make our public spaces inviting and enjoyable for us all to use.”

She says the idea arose out of discussions initiated by the Waikato District Council on the concept of ‘placemaking’ and how Pokeno residents can make public spaces ‘their own’.

“Together with our tiny library we’ve displayed photos of our town, both current and historical, and installed a unique seating area to help people enjoy the space,” says Helen Clotworthy.

To help start the ball rolling earlier this year, Waikato District Council acting Chief Executive Tony Whittaker spent two days in his home workshop building the ‘tiny library’ and donated it to the Pokeno Community Committee (along with books donated from one of the Council’s libraries).

Tony Whittaker says, “The idea behind placemaking is to encourage residents to reclaim their public spaces for community use so that our townships are not just places for carparks and shopping centres with barren, empty spaces in between.”

With help from the Council, other townships within the district are starting to pick up on the concept too, he says.

For example, a series of decorated Christmas trees made out of donated wooden pallets are being unveiled in Ngaruawahia and Huntly in the run-up to Christmas after Council staff, the Ngaruawahia Community House and the Twin Rivers Arts Centre got together to demonstrate how to produce a creative and usable product with resourceful volunteers.