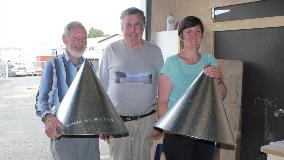 The Waikato District Council, Huntly Friendship House and the Menzshed Huntly have joined forces to build six ‘little free libraries’ for the community of Huntly.

President of the Menzshed Huntly, retired builder Andrew Price, says, “It’s a great project for the Menzshed.  We’ve got four members building these little libraries now, and we’re hoping to attract new members through the project as well.”

Huntly Community Board chair Katrina Langlands says, “The little libraries are designed to help people to enjoy our township and to spark off other ideas among our residents on how we can make our public spaces inviting and enjoyable for us all to use.  We invite the community to donate books for the little libraries so that visitors to our township can sit and read in our public places, or borrow or exchange the books with one of their own.”

She says the idea arose out of discussions initiated by the Waikato District Council on the concept of ‘placemaking’ and how Huntly residents can make public spaces ‘their own’.

The little library project is a ‘perfect companion’ to another placemaking project to upgrade Garden Place this year with an outside seat to accommodate up to 24 people under a tree in the square, she says.

Waikato District Council General Manager Strategy and Support Tony Whittaker says, “The idea behind placemaking is to encourage residents to reclaim their public spaces for community use so that our townships are not just places for carparks and shopping centres with barren, empty spaces in between.”

He says a ‘tiny library’ has already proved popular in Pokeno and the Council is hoping that the concept will be picked up by other townships around the district following the lead in Pokeno and Huntly.

Photo (left to right): Menzshed Huntly members Andrew Price and Bill Rosoman, and Victoria Kemp of Huntly Friendship House, with the roofs for two of the distinctive ‘little libraries’ being designed and built to attract residents and visitors to enjoy some of Huntly’s public spaces.