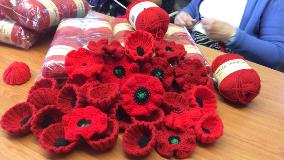 Community groups across the Waikato district are getting out their knitting needles to take part in a district-wide ‘yarn bombing’ street art project to commemorate ANZAC Day this year.

They are enthusiastically taking up an idea put forward by the Waikato District Council Placemaking Team to join forces with local Community Houses to create knitted or crocheted poppies from red wool to cover the trunk of a selected tree in each town centre for the month of April.

Primary schools in Huntly, Tuakau, Meremere and Raglan have also been approached with an invitation to take part in the project by knitting giant grey and red peggy squares on giant knitting needles to create an ANZAC blanket for a district art installation that will include stories about what ANZAC means for each of the communities that are contributing.

Waikato District Council General Manager Strategy and Support Tony Whittaker says, “The concept evokes the way in which our grandmothers knitted garments to help to keep our ANZAC troops warm, but it’s inspired by the latest international trend to use knitted or crocheted wool to create community-friendly guerilla art and graffiti.   The idea is to yarn bomb public places in ways that will surprise and delight you.”

The idea to knit poppies originated from a small project started by two Australian women that ballooned into a massive carpet of 300,000 red knitted poppies created by 50,000 volunteers for the Chelsea Flower Show in the UK in May last year.  That project then spawned a number of local Remembrance Day projects throughout the UK to decorate churches, trees and graveyards in November.

Working with the Ngaruawahia Community House, which is supporting the project district-wide, the Waikato District Council’s Placemaking Team set the ball rolling as an ANZAC commemoration project earlier this month. They sent an email to a number of community groups to test the idea, and have been happily surprised by the number of responses from groups wanting to take part.  They are now also seeking contributions of red wool from and for those taking part, as a small supply of wool brought in to start the project is nearly exhausted.

“We’re still looking for groups to take part – it would be great to see a tree decorated in every part of the district,” says Tony Whittaker.

He says the Council’s Placemaking Team was formed to support and encourage residents to reclaim their public spaces for community use, so that fast-growing townships don’t just become places for carparks and shopping centres and barren spaces in between.

Placemaking in the district is growing as a concept and there are a number of projects underway in different areas including the installation of ‘little libraries’ or mini book exchanges, unique locally-designed seating and bike racks, and public art.