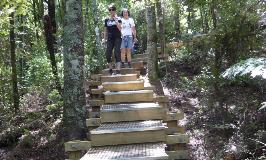 A Tauhei-based conservation group supported by Waikato District Council, has won a national award for its work to protect and enhance native plant life.

The group of volunteers, under the leadership of the David Johnstone Pukemokemoke Bush Trust chairman Warwick Sylvester, participate in working bees every month carrying out tasks such as weeding of pest plants, planting of native trees, maintaining tracks and animal pest control.

The national award recognises the work done by volunteers to restore the Pukemokemoke bush  to become an excellent example of lowland forest.

This has culminated in the construction of a 400m raised boardwalk to combat the emerging problem of the root disease kauri die-back.

The boardwalk protects the kauri by reducing the risk of the soil-borne, footwear-transmitted infection by moving any foot traffic through the kauri stand away from the soil.

Waikato District Council has supported the project by providing funding of about $20,000 over the past 18 months through its Community Wellbeing Trust and its Rural Ward Fund.

Mr Sylvester is delighted the Friends of Pukemokemoke Bush Reserve has received national recognition for its work, but maintains that the real rewards lie elsewhere.

“To watch the way in which children value the experience and are learning about the environment at the reserve is something that we especially value,” he says.

“Our main reward is in the many happy faces of runners, walkers, picnickers and children who appreciate what a good piece of native bush can look like.”

“The Friends of Pukemokemoke Bush Reserve do a great job to help protect a fabulous area of native bush in the Waikato District,” he says.

“We’re happy that we’ve played a small part in the group’s mission to restore and maintain such a beautiful and important reserve, popular with locals and visitors alike.”

The David Johnstone Pukemokemoke Bush Reserve is a 40ha remnant of lowland native forest located on the Whitikahu Road at Tauhei.