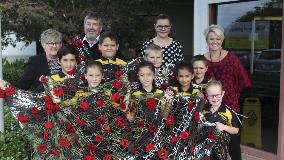 Children from five primary schools in Waikato district knitted the ANZAC camouflage nets on giant needles as they learned about the history of ANZAC Day and how families at home would knit garments for the troops overseas. The schools involved with the project were Te Uku School near Raglan, Kimihia Primary School in Huntly, Waingaro School, Taupiri School and Tuakau Primary School.

The poppies were knitted or crocheted by local groups from all over the Waikato District with contributions from groups outside the district.

The street art installation at Waiouru is one of more than 30 ‘yarn bombing’ installations including trees and other outdoor displays being created with more than 8,000 hand-crafted poppies throughout the Waikato District for ANZAC commemorations this year to mark the international First World War Centenary, WW100 New Zealand.

Mayor Sanson says, “Our grandmothers knitted garments to help to keep our ANZAC troops warm, and so we’re bringing history into the present-day by following the latest international trend to use yarn to create community-friendly street art.  These art installations also represent the local, national and international bonds that we have been weaving in the century since we first sent our ANZAC troops overseas.”

The museum’s Senior Curator Windsor Jones says, “We welcome this contribution from schools and groups in the Waikato District to help us commemorate ANZAC Day this year.  It’s a great opportunity to use weapons of war and conflict to commemorate and remember those who have fallen in a novel and unique way.”

Last weekend, more than 30 trees in 21 townships and communities across Waikato District started to ‘flower’ in time for ANZAC Day with decorations using more than 6,000 red knitted poppies.

Nearly 2,000 more poppies crafted from felt and yarn are also ‘blooming’ along the northern stretch of Te Awa: Great New Zealand River Ride cycleway at Ngaruawahia and across the Perry Bridge over the Waikato River.

Community groups across the Waikato district, including knitters from school age to retirement age, have taken up the idea put forward by the Waikato District Council Placemaking Team to join forces with local Community Houses to decorate the trunk of at least one tree in each town centre for the month of April.  Some towns are decorating several trees.

Groups in Eureka, Glen Massey, Glen Murray, Huntly, Mangatangi, Mangatawhiri, Maramarua, Matangi, Naike, Ngaruawahia, Pokeno, Port Waikato,  Puketaha, Raglan, Tamahere, Taupiri, Tauwhare, Te Kauwhata, Tuakau, Waingaro, and Waitetuna, have been enthusiastically knitting for the past month and the first of many trees have started ‘blossoming’ around the district this week.

As word has spread, the project has even attracted contributions from knitters from other parts of New Zealand and from as far afield as Japan.

Councillors and council employees have also joined the fray to knit poppies to decorate a tree and create an art installation at the Council. They have been assisted by prisoners at Spring Hill Corrections Facility who have created plywood art cutouts of a tank, ship and warplane representing the troops who served and died, together with other representations of those who remained at home.

The idea to knit poppies originated from a small project started by two Australian women that ballooned into a massive carpet of 300,000 red knitted poppies created by 50,000 volunteers for the Chelsea Flower Show in the UK in May 2016.  That project then spawned a number of local Remembrance Day projects throughout the UK to decorate churches, trees and graveyards in November.

Working with the Ngaruawahia Community House, which is supporting the project district-wide, the Waikato District Council’s Placemaking Team set the ball rolling as an ANZAC commemoration project last year and decided it was so popular it was worth repeating.  They distributed starter packs of wool to groups taking part, and volunteers have contributed more to bring the concept together.

The Council’s Placemaking Team was established to support and encourage residents to reclaim their public spaces for community use.  Information about placemaking , the philosophy behind it and the advantages it brings to the community can be found on the Waikato District Council website (search for ‘placemaking’ on the site), or by contacting the Waikato District Council community placemaking team Betty Connolly (Betty.Connolly@waidc.govt.nz) and Lianne Van Den Bemd (Lianne.VanDenBemd@waidc.govt.nz). 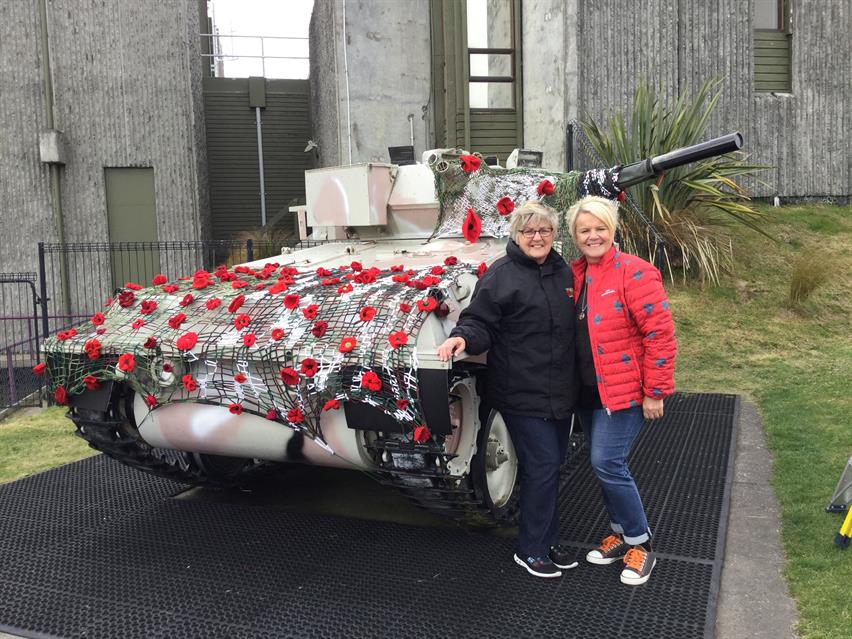