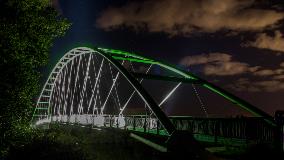 A plan to cater for growth in the north of the district and an iconic bridge have secured finalist spots for Waikato District Council in this year’s Local Government New Zealand (LGNZ) EXCELLENCE Awards.

The project to construct the Ngaruawahia to Horotiu section of the Te Awa River Ride is a finalist in the EXCELLENCE Award for Best Practice Contribution to Local Economic Development.

The final 3km of the shared walkway/cycleway, including the iconic Perry Bridge over the Waikato River delivered the infrastructure to complete the link to the rest of the Te Awa River Ride which had previously ended in Horotiu.

The project was the result of years of collaboration between multiple stakeholder groups, each represented by passionate individuals striving for better outcomes for their communities.

Judges said this is an ambitious tourism infrastructure investment which provides the opportunity for positive long-term socio-economic growth and health wellbeing in the Ngaruawahia area.

The North Waikato Integrated Growth Management Business Case is a finalist in the EXCELLENCE Award for Best Practice in Governance, Leadership and Strategy.

This saw Waikato District Council, Auckland Council, Hamilton City Council, NZTA, Waikato Regional Council, Auckland Transport, Ministry of Education and two district health boards co-operating to develop a business case for managing and proactively planning for expected growth in the northern area of the district over the next 30 years.

Judges welcomed the initiative as a holistic approach and a means of future-proofing and preparing for clear challenges of future population growth.

Waikato District Council Chief Executive Gavin Ion is delighted that the council has again made the finals after it was named as a finalist in two categories last year.

“Collaboration and engagement were key aspects of both these projects and it’s very pleasing to see that the efforts of our staff and all our partners have been recognised in this way,” said Mr Ion.

The awards, now in their fifth year, recognise and celebrate the key role local government plays within New Zealand communities.

The awards attracted its highest number of entries this year, with 75 applications and 22 finalists for six awards.

Winners will be announced at the LGNZ conference gala dinner in Christchurch on 16 July.