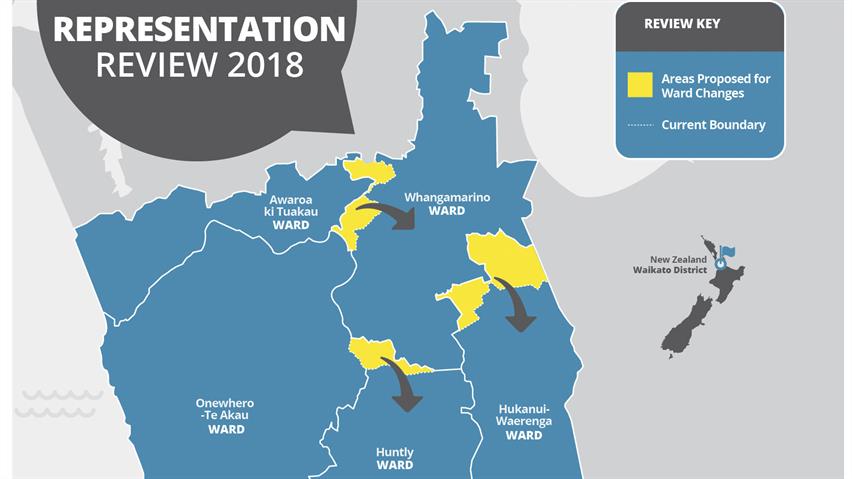 A six-week consultation opens today [Wednesday 20 June] on Waikato District Council’s representation arrangements for the next local body elections, including the shape of the district’s voting Wards and the number of Councillors elected.

Waikato District Mayor Allan Sanson says, “The Council is required to review these arrangements at least once every six years to ensure that individuals and communities in our district are fairly represented on and by the Council.  Any changes as a result of this review will come into effect for the 2019 elections.”

The Council’s proposal recommends a modified status quo which retains 13 councillors elected from 10 wards (plus the Mayor elected at large), but with slightly modified ward boundaries in the north to offer fairer representation in the district’s northern-most Awaroa ki Tuakau Ward where the district’s population has grown.

If adopted, the proposal would see Mercer shifting from the Awaroa ki Tuakau Ward into the Whangamarino Ward so that the wider Mercer community would be entirely located in one ward.  It would also see Rangiriri moving from Whangamarino into the Huntly Ward, and a small part of Whangamarino’s southeastern rural community moving into the Hukanui-Waerenga Ward.

In 2017 the Council made two other important decisions as a part of the representation review process – the decision to retain ‘first-past-the-post’ as the electoral system; and the decision not to introduce Maaori wards in the district, but to explore ways by which Maaori interests can be better-represented through Council processes.

Submissions can be made online at www.waikatodistrict.govt.nz/sayit where full information about the representation review and proposal is available.

Following consultation on the review, hearings will be held in August before the Council resolves its final proposal for notification on 12 September.  A month is then allowed for any appeals or objections before a final determination is made by the Local Government Commission, if required, in April next year.
ends