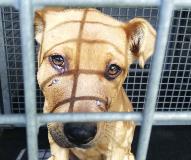 Waikato District Council’s Animal Control team are appealing for information after finding a dog in Whatawhata that has been shot multiple times with an air gun.

“We received reports of a stray dog living under someone’s cabin on Maori Point Road, in Whatawhata. When we went to the property we found a young female pup, less than 3 months old, with air gun pellets in her face and muzzle, and other wounds to her head.”

The pup was taken to the vets for treatment, where they found more than 10 pellet wounds to her head, legs and body.

“Due to the nature and location of her injuries we suspect she was tied up first before being shot.”

Animal Control have put notices in letterboxes appealing for information.

“We have told nearby residents so that they can keep a close eye on their pets, because we would hate to see this happening to another animal. We are also asking for people to let us know if they have any information that may help us find who is responsible for this cruelty so that we can pass it on to the relevant authorities.”

The dog is currently being cared for by the Waikato SPCA and is expected to make a full recovery, however she will need to undergo several surgeries.