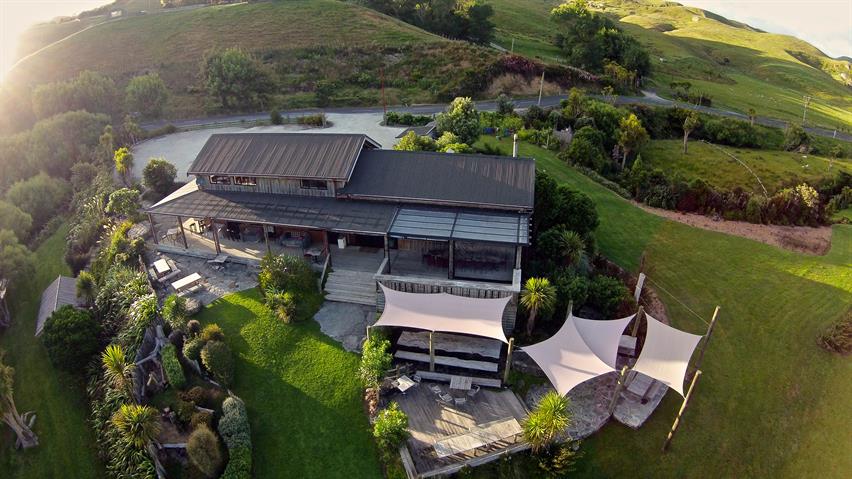 Waikato district eatery and outdoor activities venue, Nikau Caves and Café, has entered this year’s ‘Tino Reka te Kai Matariki Dish Challenge’. The café is one of 21 eateries which have taken up the region-wide event - running from now until Monday, 11 July inclusive - celebrating the harvest grown, produced and served in the Waikato region.

The Nikau Caves and Café is based at Waikaretu, North Waikato, where the Woodward family has been hosting tours on their farm and the Nikau Cave since 1994. The café side of the business opened in 2008. Along with all other entrants in the Matariki Dish Challenge, they’ve added a new dish to their menu which has been inspired by Matariki (the Maaori New Year), using at least two locally-produced ingredients. Described as a ‘unique Matariki version of the traditional English Ploughman’s Lunch’, their dish is essentially a simple ‘do-it-yourself-lunch’ of cheese, homemade bread and butter, pickled gherkins, watercress and Tom Thumb tomatoes.

Organised by Waikato Food Inc. and supported by the Waikato District Council, Waikato-Tainui, WEL Energy Trust and Virtualprint, the Matariki Dish Challenge gives eateries in the Waikato district, and the whole region, a chance to celebrate Matariki. Waikato Food Inc. Chairperson, Vicki Ravlich-Horan says this year they’ve received almost twice as many entries, although it’s only the second year the event has been held. “Not only that, the calibre of the entries is outstanding and a true reflection of the fabulous talent we have in the Waikato.”

Waikato District Council Mayor, Allan Sanson, says it’s great to see a local eatery taking part in the Matariki Dish Challenge and he’d like to see more do so in the future. “It’s also interesting to note that while the focus is on the food for the Nikau Caves and Café, they’ve successfully combined that with the attractions of their remote location to create a unique experience all round. It shows that innovative thinking can attract visitors to outlying areas and that the Waikato district has plenty to offer that’s different from other areas.”

A panel of mystery judges will decide the Supreme Winner (won last year by Victoria Street Bistro). They’ll receive the Tino Reka te Kai Matariki Dish Challenge trophy and vouchers from Bidvest Fresh and Mediaworks. Judges will consider each chef’s culinary creativity and skill, use of local ingredients and reference to Matariki, says Vicki Ravlich-Horan. “However they’ll also take into account the service; staff knowledge and ability to ‘up-sell’ and the eateries’ understanding of their business and target market.”

There is also a chance to win a weekend away in Raglan for any diners who vote for a venue in the ‘People’s Choice’ category (the category winner will win a staff party donated by Vilagrad Winery).

The results will be announced and prizes presented at a prize giving event to be held on Monday, 1 August.

To find out more about the Matariki Dish Challenge, go to www.waikatofoodinc.com – a full list of eateries that have entered is available under ‘events’.

Note: Waikato Food Inc. is a not-for-profit, member-based organisation, whose vision is to raise the profile of the Waikato as a region of food excellence while helping it grow its regional food and hospitality businesses.