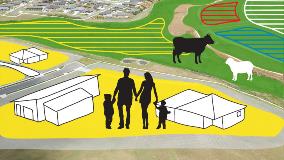 We are publicly notifying Variation 1 to the Proposed District Plan.

The Variation 1 map now shows the overlay extending out 2,500m from the runway. Originally, this was incorrectly shown as extending 2,000m. As part of the variation we are also proposing some minor text changes to make it easier to understand.

Variation 1 has been publicly notified and submissions are now open to the public. Get your submission in by 5pm on Friday 31 July.

Come and see us during this drop-in session if you have any questions.

The open day is also viewable through our Facebook page.