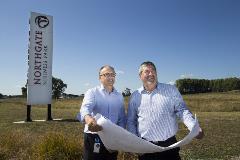 The port company announced today it has signed a conditional agreement to buy 33 hectares of land at Northgate Business Park at Horotiu to establish a major inland freight hub.

Sanson has welcomed the decision and said it was a major success for his council’s economic development strategy adopted in 2012.  In October 2014 the council launched a website (www.openwaikato.co.nz) to support new business and investment in the district.  The site was receiving thousands of visits each month and had generated a number of enquiries.

“Our location in the golden triangle between Hamilton, Auckland and Tauranga, and our commitment to encouraging and assisting investment means the Waikato district has built a reputation as the go-to place for investors.”

Sanson said the announcement would be no surprise to those in the logistics, freight or exporting sectors.

“Northgate is adjacent to major transport links, both road and rail, and sits between two major sea ports and Auckland international airport.  Resource consents have been in place since 2011 and the land is zoned industrial.  The whole package is already there,” he said.

Sanson said Waikato District Council was fielding a growing stream of investment enquiries including from another major dairy manufacturer as well as Chinese investors.

Some Auckland-based companies were talking to the council about relocating to the Waikato district because of its easy access to Auckland, the availability and cost of land and a strong local labour market.  Many were sold on Waikato’s strategic location and existing infrastructure plus the council’s positive approach to encouraging growth and development, he said.

“Growth is excellent but we need to be mindful about what sort of growth.  What’s great about the Ports of Auckland announcement is that this will be the catalyst for high-quality job opportunities for our people.  And those benefits will flow directly into our communities.”

“That’s what we want - growth that has a direct payback for our district with the ability to stimulate further economic activity.”

Sanson noted employment growth in the Waikato district had increased by 3.1 per cent in 2015 compared to 2.4 per cent nationally.  At the same time, the number of businesses had grown by 2.3 per cent compared to 1.8 per cent across New Zealand.

“Waikato is a growing district, we all know that and yes that can be challenging. As a council, we’ve focused on putting the right building blocks in place so that developers  and organisations like Northgate and the port want to come to the Waikato and do business.  And they do, so I’m pretty chuffed.”