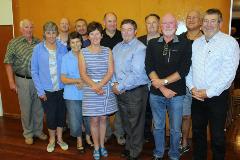 At a public meeting held in Pokeno last night, residents and ratepayers elected a new Pokeno Community Committee to represent the community for the next three years and to enhance liaison between the Waikato District Council and the community.

A Chairperson, Deputy Chairperson and Secretary will be appointed by the Committee when it has been formally constituted at its first official meeting on 10 May, 7.30pm at Pokeno Community Hall.

Waikato District Council General Manager Strategy and Support Tony Whittaker says, “Pokeno is growing rapidly, and the Council needs to work closely with the community as we plan for the infrastructure that will be needed now and in the future.

“We are delighted at the interest shown by members of the community, and their commitment to being involved in the future of Pokeno.

“The new Community Committee will play a vital role in that process and in the way that Pokeno continues to develop as an attractive place to live and work.”