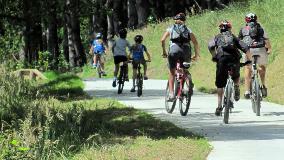 The award is for an infrastructure project that has had the most significant impact on encouraging more people to ride and creating a bike-friendly future and is one of six Bike to the Future awards established by the NZ Transport Agency and Cycling Action Network.

Waikato District Council is proud to be supporting this $4.5 million project along with the Te Awa Trust, the government’s Urban Cycling Fund and the NZ Transport Agency. We look forward to completion of the final Horotiu section of Te Awa – The Great New Zealand River Ride later this year that will complete a continuous Waikato riverside cycleway from The Point in Ngaruawahia to Hamilton Gardens.