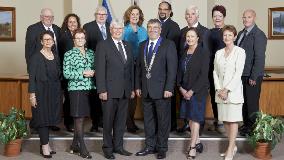 Waikato District Council has met its financial targets for the past year, and is focused on managing rapid growth in sustainable ways, says Mayor Allan Sanson.

In the Council’s Annual Report, adopted today (9 October), Mayor Sanson says, “We made good progress in finding sustainable ways for maintaining and building our infrastructure to deliver the services we need to support an expected population growth of about 45 per cent over the next 30 years.”

Waikato district is the third fastest-growing district in the country, measured by consents for new dwellings that now rival Wellington, and with a business and employment growth higher than the national average. Its population is expected to grow from about 71,200 this year to 103,000 in 2045.

• new records set in efficiency and customer responsiveness in roading, with a construction programme that came in under budget and with response times to customer requests averaging less than two days

• the introduction of a user-pays system for all kerbside waste collections that has helped reduce the amount of refuse sent to landfill from the central and southern kerbside collections by more than 1,000 tonnes

• results from a customer satisfaction survey that showed satisfaction with the services received was 70 per cent overall.

Mayor Sanson says, “We’ve set rates and debt level that are affordable, but that also enable us to provide for the needs of our growing community.”

“This is 66 per cent below our debt servicing limit, offering capacity for funding services and facilities as needed for the future,” he says.

Mayor Sanson says the Council is working to attract new business to the district in the interest of balanced growth and the provision of local employment opportunities, and the latest figures available showed the Waikato district attracted 183 new businesses and nearly 1,000 new jobs in the year to March 2016.  Major developments in the past year included announcements that the country’s second largest dairy processor, Open County Dairy, is building a new plant at Horotiu, and that US-based Cobb Vantress plans to establish a $58 million poulty farm and hatchery near Huntly.

The Council’s registration of interest for extended Government funding of broadband bore fruit with the Government’s announcement in January that eight Waikato district towns would be included in the expansion of the UFB programme, and a further six towns included in a second expansion announced after the close of the financial year. The Council was also successful in winning $37 million from the Government’s Housing Infrastructure Fund to facilitate housing development in Te Kauwhata over the next decade.

Mayor Sanson says the Council is also focussed on providing facilities and resources that will support vibrant and resilient communities, and on involving the community in decisions affecting the future of the district.

He pointed to the council’s efforts in community engagement, including local iwi, its Placemaking strategy, and youth leadership and employment initiatives.

“We also committed more than $750,000 in grants for distribution to 160 community groups throughout the district to enable our communities to come together to meet some of their own needs.”