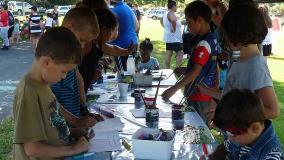 Waikato District Council has committed more than $30,000 Creative Community Scheme funding to support creative arts projects and events in the district this year including the Raglan Film Festival, wearable arts events in Huntly and Raglan, and classes in a range of creative arts in Ngaruawahia and Raglan.

Grants submissions from arts groups from around the district were heard by the Council’s Creative Communities Scheme Assessment Committee.

The Twin Rivers Arts Council based in Ngaruawahia was granted $6,978.54 for a series of creative arts classes and workshops for people of all ages from around the north Waikato, teaching Darjit and earth forms sculpture, traditional whatu muka (fibre art and weaving), mosaics, life drawing and other multicultural arts techniques.

The Raglan Community Arts Council was granted $4,096 to support the 2016 Raglan Film Festival, to be held in September and featuring short films by local film makers as well as New Zealand feature films and documentaries.  It was also granted $4,104.78 to continue to run its popular afterschool clay classes for primary and intermediate children.