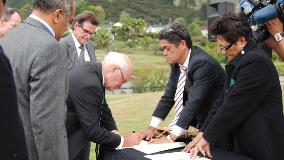 NOTE: Postponed until further notice due to the weather.

In the lead-up to the Maaori New Year (Matariki), Waikato District Council is planning a riverside native tree planting event to commemorate the signing of its historic Waikato River Joint Management Agreement with Waikato-Tainui in 2010.

To celebrate the milestone, up to 1,000 native trees will be planted on Tuesday morning, May 31 at the site of the Old Flour Mill on Old Taupiri Road, Ngaruawahia.

Signed in March 2010, the Joint Management Agreement (JMA) between Waikato-Tainui and Waikato District Council continues to cement the commitment between Waikato-Tainui and Waikato District Council to co-govern and co-manage the Waikato River with an overall objective of restoring and protecting the health and wellbeing of the River.

Waikato District Mayor Allan Sanson says, “In commemorating our Joint Management Agreement we also recognise that politically, socially, culturally and economically, Waikato-Tainui are key partners contributing to the success of our district.”

Waikato-Tainui Chief Executive Parekawhia McLean says, “The Joint Management Agreement between Waikato-Tainui and the Waikato District Council was the first one signed under the Waikato River Settlement Act 2012.  While it will take many years to achieve the vision of the River Settlement, we are really pleased with how quickly a close working relationship with the Council has been established in the past five years. Any initiative, big or small, which helps to restore our Awa is important to us so we are looking forward to being involved with this event next week”.

At the commemoration event next Tuesday, volunteers from council and Waikato-Tainui as well as staff and pupils from Te Kura Kauapapa Maaori o Bernard Fergusson will plant up to 1,000 trees at the Old Flour Mill site. The council-managed site has been chosen for the planting because of its proximity to the Waikato River and the historic significance of the Old Flour Mill, the oldest reinforced concrete building in the Southern hemisphere, protected by the NZ Historic Places Trust.

“It would have been great to restore the mill building itself, but as considerable funds would be needed to do this, that’s not feasible at this time,” says Mayor Sanson. “However, our planting activities will help to rehabilitate and open things up so people will have better access to the building and its link to the Waikato River.”

Note: More information on the JMA and a link to the Joint Management Agreement document can be found on the Waikato District Council’s website at www.waikatodistrict.govt.nz/your-district/iwi-in-our-district/iwi-working-together.

For more details on Waikato district-based Matariki festival events (including activities and displays at your local library), search for 'Matariki' on our website.