Wally Pollock commemorated by reserve in his name 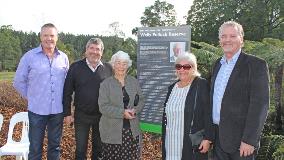 A celebration of Tamahere man Wally Pollock, who dedicated his life to the local community, took place at a special event on 11 June.

Titoki Drive’s newly named Wally Pollock Reserve was unveiled earlier this month and borders the historic Potuwha Pa. The pa site is of great significance to the Ngati Haua iwi, as it is one of the best preserved sites in the Waikato.

Waikato District Mayor Allan Sanson and Mr Pollock’s wife Val unveiled a sign as part of the ceremony which recognises the former Waikato District councillor’s contribution to his community.

The re-naming of the reserve was in recognition of the late Mr Pollock’s service to Tamahere and the entire Waikato district as a councillor between 1992 and 2007.

Wilson Pollock says his father wanted the site to be protected and shared with the local community. He set about convincing the local estate owners of the importance of preserving it for future generations. Waikato District Council has since built a walkway leading to the stream at the base of the Pa site.

“Dad would be thrilled and proud to look down on what ‘his people’ have done in his memory. Dad was all about people. He made a lifelong commitment to every part of the local community.”

For his services to the community, Mr Pollock was awarded a Queen’s Service Medal in 2005 and the naming of the reserve in his honour also recognises his impact on the local community. This also includes his efforts in negotiating the preservation of the Potuwha Pa site.

Mr Pollock was a life member of the Matangi-Hillcrest Rugby Football Club and Waikato Rugby Union, having been passionate about rugby his entire life. Horses, especially thoroughbreds, held a special piece of his heart and he was an active member of the Cambridge Jockey Club for 27 years.

He farmed at Eureka for 45 years and received a lifetime achievement award from the dairy section of Federated Farmers. Mr Pollock was also a dedicated Rotarian and received a Paul Harris Fellow, Rotary’s highest honour, in 1989.

Speaking at the event, Mayor Sanson felt Mr Pollock would have been wondering what all the fuss was about. “Today is a testament to the man he was,” he said.

Mr Pollock’s successor as Tamahere councillor, Wally Hayes, was also present for the unveiling and credited him with where he was today. “This is a special project for a special man and today is a special day.”

A large number of Mr Pollock’s family including wife Val, daughter Sally, Waikato district councillors, friends, iwi and members of the Tamahere community were present at the ceremony to unveil the sign to celebrate the naming of the reserve which will now be enjoyed by generations to come.