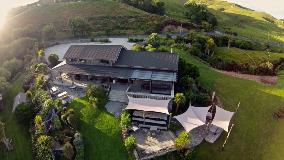 Andrew Clarke and the team at Victoria Street Bistro created the dish ‘Pakoire Moa’ using ostrich to imitate moa, pakoire meaning imitate.  Andrew says, “I wanted to create a dish that reflected the true terroir of the Waikato region making use of the abundance of native flora available during the course of the Matariki season.”

Nikau Caves and Café, based at Waikaretu, North Waikato, created the dish ‘Nga Kai a Matariki’, a “unique Matariki version of the traditional English Ploughman’s Lunch”, using in-season local produce including cheese, homemade bread and butter, pickled gherkins, watercress and Tom Thumb tomatoes.  Acting manager Charlotte Boden says, “We were really pleased to win the People’s Choice award and that all our hard work paid off.”

Now in its second year, the Matariki Dish Challenge attracted 21 entries from eateries around the Waikato region. Each venue had to create a feature dish for the competition inspired by Matariki (the Maaori New Year), and using at least two locally-produced ingredients to celebrate the harvest grown, produced and served in the Waikato region.

Waikato Food Inc Chairperson, Vicki Ravlich-Horan, says this year’s standard was so high that two finalists and two highly commended entries were also recognised at the awards night held in Hamilton this week. “We not only received almost double the entries, the calibre of these was outstanding; a true reflection of the fabulous talent we have in the Waikato.”

Organised by Waikato Food Inc. and supported by the Waikato District Council, Waikato-Tainui, WEL Energy Trust and Virtualprint, the Matariki Dish Challenge is designed to help promote Waikato restaurants and cafés and provide an opportunity for the local industry to grow and improve.

Waikato District Council Mayor, Allan Sanson, says the annual Matariki event combines the opportunity to compete with other similar venues around the region while showcasing what makes each eatery special. “It certainly demonstrates the strength and quality of our local food industry when an eatery in one of our smallest communities can win popular recognition in a competition featuring the best in the region.”