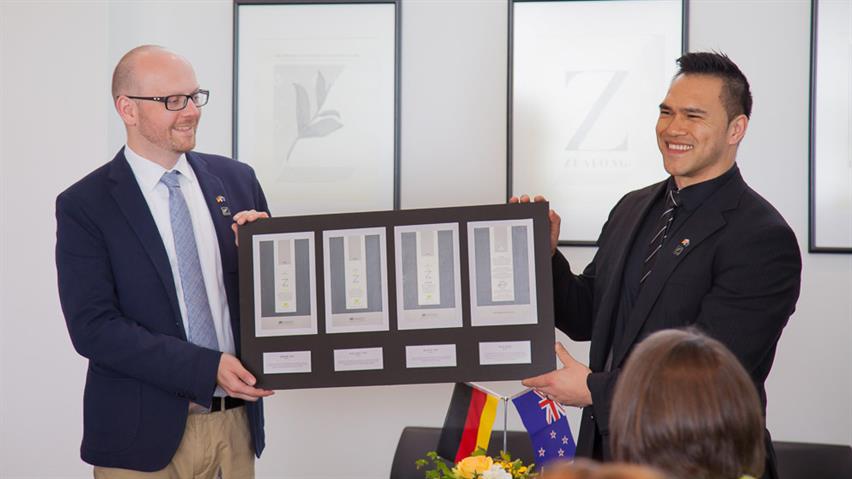 The agreement, which will see 10 per cent of Zealong’s annual tea production, or enough tea to brew two million cups of tea, exported to Germany, is testament to Zealong’s commitment to the environment, purity and transparency, says Zealong Tea Estate General Manager Gigi Crawford.

Only an elite fraction of the annual world tea export harvest – 0.5 per cent – is considered for purchase by the German company’s master tea tasters, with each tea undergoing rigorous testing before and after purchase for pesticides and heavy metal residues.

“We are both excited and honoured that our products have been chosen not only to be part of TeeGschwendner’s offering of premium teas, but also part of a unique co-brand cooperation,” says Ms Crawford.

“It’s our no-compromise approach when it comes to the environment that brings added-value to TeeGschwendner.”

In terms of quality and purity, Zealong tea rates highly on the world stage, being 100 per cent certified organic and ISO certified across every step of the production process, making it fully traceable – a unique status in the tea industry.

With the demand for organic products increasing worldwide and New Zealand looking to further capitalise on its ‘clean green’ reputation, Zealong Tea Estate, established on 48 hectares in the Waikato district outside Hamilton, is being touted as a leader in the food and beverage industry.

Trade Minister Todd McClay, who tweeted about Zealong’s “big export potential” when he visited the estate earlier this year, says the deal is great news not only for Zealong but for New Zealand exporters.

“Germany is one of the world’s largest economies and a key trading partner. It is one of our largest export markets for venison and sheep meats but other trading opportunities exist, particularly in food and beverages. New Zealand companies are working actively in Germany in these sectors and it is great to see Zealong’s success.”

TeeGschwendner was established in 1978, with the opening of a small tea shop in Trier, Germany, and has since grown to become a global leader in specialty teas, with 145 stores in Germany, Austria, Brazil, Saudi Arabia and the United States. Each of its tea shops carries a selection of more than 300 varieties of tea.

Zealong tea will initially be sold in TeeGschwendner’s 123 German stores.

“We demand that our tea products be of the highest quality, and this quality is assured by certified, transparent processes. Zealong’s identical attitude to food safety ensures that their teas pass our screening with flying colours every time,” says TeeGschwendner tea taster and purchaser Daniel Mack.

“We always take Zealong tea as the perfect example of how much handcrafting goes into a magnificent tea, and how much influence that has on the taste of their distinct tea flavours.”

Zealong is New Zealand’s only commercially grown tea.  The plantation was established in 1996 and the brand launched in 2010.