Dress sense delivers Cans for a Cause 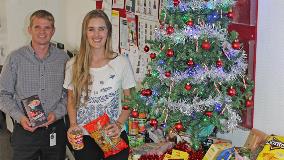 Casual clothing is being used to collect Cans for a Cause at Waikato District Council.

Every Friday is Casual Friday at Council. In exchange for the opportunity to “dress down” for the day, staff are encouraged to donate a gold coin to that month’s nominated local cause.

But coins have been swapped for cans of food for Casual Fridays in December. The cans will be donated to food banks throughout the Waikato district in the week before Christmas.

Waikato District Council Acting Chief Executive, Tony Whittaker said the Council’s staff was happy to contribute towards making the lead-up to Christmas a little easier for families in need.

“Many families find it tough to make ends meet and that pressure increases as Christmas approaches,” he said.

“We hope our Cans for a Cause initiative goes some way to ease that pressure as we enter a special time of year.”

Ngaruawahia Community Care and Crisis Support Manager, Viv Annandale said the need at its food bank was huge at all times of the year.

“The demand always outweighs the supply and we’d be grateful for anything we can get,” she said.

“Many people think nothing of donating a couple of cans but it means a lot to people who have nothing to eat.”

Ngaruawahia Community Care and Crisis Support distributes about 20 food parcels a week and at Christmas it sends them to people they know are struggling.

“A lot of children won’t be getting much this Christmas and food parcels give families light relief at this time of year,” said Viv.

If members of the public want to join Waikato District Council in donating non-perishable food to one of the district’s food banks they can contact Ngaruawahia Community Care and Crisis Support on 07 824 5100; Huntly Community Advice Centre on 07 828 9500; Raglan Foodbank on 07 825 8662 or Tuakau Budgeting and Family Support Services on 09 236 9804.