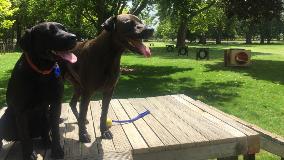 Te Kowhai’s old playground equipment has been put to good use, with Waikato District Council using it to create a dog agility park at Horotiu.

The new dog agility exercise area was installed last week at the dog park on the corner of Horotiu Road and Great South Road (on AFFCO land), and it’s already proving to be a big hit with locals.

Last night there were a large number of dog owners and their dogs trying out the new equipment, with many commenting that it was the busiest they’ve seen the park.

Tauhei resident Josh Quartermaine has already made the trip to the park twice this week to exercise his dog Izzie. “It’s great to have this in our district, and it’s fantastic that it’s been created from recycled materials,” says Josh. “I think it’s a great idea. It will be well used and will attract more users to the park.”

He says Izzie gets a lot of exercise on his lifestyle block, but the new exercise equipment also gives her the mental stimulation she needs. “Izzie is already learning new tricks and it gives her a chance to socialise with other dogs.”

Waikato District Council staff came up with the bright idea when they were removing the old equipment at the Te Kowhai playground, as part of its playground replacement programme. Animal Control Team Leader Megan May says staff were keen to make use of the old equipment. “The dog agility exercise area is a wonderful addition to the district and will give dog owners another great area to exercise their dogs. We will look at creating other dog agility parks in our district as other playgrounds are removed.”

A doggy fun day will be held at Horotiu Dog Park on Saturday 18 March from 10am to 2pm. Bring your pooch along for a play. There will be a sausage sizzle, entertainment and spot prizes for the dogs.