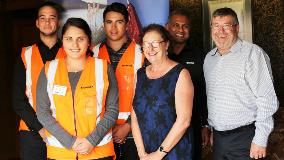 Two career pathway programmes in the Waikato District are helping to address the skills shortage in the New Zealand infrastructure industry following the graduation of 21 trainees and apprentices last month.

The Downer Basic Civils programme, between Downer and Waikato-Tainui, in partnership with the Ministry of Social Development, has resulted in 7 previously unemployed members of the community gaining a qualification and employment. Downer and WDC are partners of the Waikato District Alliance (WDA) a joint venture formed to manage and maintain the roading assets of the district.

The Basic Civils Programme aims to attract capable people into the industry and give them career pathways along with industry qualifications.

Last year Waikato-Tainui and Downer met to discuss the possibilities of engaging with unemployed members of the community and offering work opportunities.

“We have taken this programme and worked together with Downer to ensure it is contextual to the needs of our Iwi. The two week schedule encompassed an introduction to infrastructure framed by the work of Waikato-Tainui in the community,” says Kawena Jones, Employment Lead at the Waikato-Tainui Careers Centre.

“To get the most out of the programme, the team at the Waikato-Tainui Careers Centre ran a robust pre-employment process to ensure those who made it through had the very best chance to take on a career in infrastructure. We wanted to ensure this investment worked for everyone” says Mr Jones.

The programme is designed to attract local people to careers in infrastructure and provide a clearly defined career path, supplemented with studies and linked to a national qualification.

In March, Downer also launched an apprentice programme for the Waikato region, linked to NZQA Level 4 qualifications, with 14 apprentices.

“In the past, the industry has not had a clearly defined trade like other mainstream trades such as builders, plumbers and electricians,” says WDA manager Doug Carrasco.

“Having a qualification attached to what used to be a “road worker”, has definitely attracted a high calibre of people, who ordinarily would have not considered applying for entry level jobs in the industry,” says Mr Carrasco.

Through the Downer Basics programme the trainees have achieved 50% of the credits towards their Infrastructure Works Level 2 Qualification. They have six months to achieve the rest and after that they can progress to Level 3 or 4 through the apprenticeship programme

The roading industry in New Zealand, along with many other industries, is experiencing a shortage of skilled personnel.

“By providing these learning opportunities that are linked with career pathways we are in a position to attract candidates who are keen to succeed,” says Mr Carrasco.

“The calibre of candidates through this intake has been very high. The candidates went through multiple selection processes to get to the point of starting the academic part of the programme.”

Schemes like the Downer Basics Civils Programme are designed to create depth and succession in organisations that have an ageing workforce.

“Even if these trainees and apprentices do not stay with the Waikato District Alliance for a long period, the industry as a whole will see the benefits in the years to come,” says Mr Carrasco.

The intention is for Waikato District Alliance to run the Downer Basic Civils programme annually.