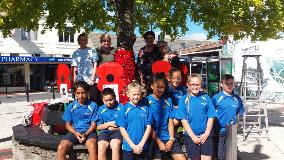 Community groups across the Waikato district are decorating trees with thousands of red knitted poppies in a district-wide ‘yarn bombing’ street art project to commemorate ANZAC Day this year.

Groups in Port Waikato,  Matangi, Tuakau, Pokeno, Huntly, Ngaruawahia, Raglan, Glen Massey, and Te Kauwhata have been enthusiastically knitting for the past month and the first of many trees ‘blossomed’ in Garden Place, Huntly, today (Friday 7 April).

Knitters from school age to retirement age have taken up an idea put forward by the Waikato District Council Placemaking Team to join forces with local Community Houses to create knitted or crocheted poppies from red wool to cover the trunk of at least one tree in each town centre for the month of April.  Some towns, like Huntly, are decorating several trees.

All of the trees will be decorated by Tuesday April 18 and will reflect the individual interpretations of each community.  The Port Waikato group, for example, is creating a special ANZAC tree out of driftwood for their knitted poppies

Primary schools in Huntly, Tuakau, Taupiri and Te Uku (near Raglan) have also taken part in the project by knitting giant grey-green squares on giant knitting needles to create an ANZAC blanket for a district art installation that will include stories about what ANZAC means for each of the communities that are contributing.

Waikato District Mayor Allan Sanson and his fellow Councillors also joined the fray by knitting or by visiting knitting groups to encourage progress.

Mayor Sanson says, “Our grandmothers knitted garments to help to keep our ANZAC troops warm, and so we’re bringing history into the present-day by following the latest international trend to use wool to create community-friendly street art.”

The idea to knit poppies originated from a small project started by two Australian women that ballooned into a massive carpet of 300,000 red knitted poppies created by 50,000 volunteers for the Chelsea Flower Show in the UK in May last year.  That project then spawned a number of local Remembrance Day projects throughout the UK to decorate churches, trees and graveyards in November.

Working with the Ngaruawahia Community House, which is supporting the project district-wide, the Waikato District Council’s Placemaking Team set the ball rolling as an ANZAC commemoration project earlier this year. They bought enough wool to distribute to groups for the first 3,000 poppies, and volunteers have contributed even more wool to bring the concept to life.

The Council’s Placemaking Team was established to support and encourage residents to reclaim their public spaces for community use.  Information about placemaking , the philosophy behind it and the advantages it brings to the community can be found on the Waikato District Council website (search for ‘placemaking’ on the site), or by contacting the Waikato District Council community placemaking team Betty Connolly (Betty.Connolly@waidc.govt.nz) and Lianne Van Den Bemd (Lianne.VanDenBemd@waidc.govt.nz).

Photo and others available: Tree decorated with knitted poppies in Garden Place, Huntly, by Huntly Friendship House and supporters including local school children.

Editor’s Note: Check out our website prior to ANZAC for updated photos.  Trees in each area are expected to be decorated on the following dates: Huntly 7 April; Port Waikato and Ngaruawahia  10 April; Matangi 12 April; Tuakau 17-18 April; Raglan 18 April; Te Kauwhata, Pokeno and Glen Massey by 18 April, dates to be confirmed.