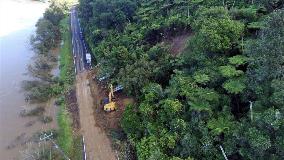 As Waikato District Council staff grapple with the aftermath of ex-Cyclone Debbie, and with more bad weather forecast for later this week, customer service requests are being prioritised according to necessity of work.

And more rain is on its way. A low in the Tasman Sea is forecast to bring heavy rain to an already sodden North Island on Wednesday. And Cyclone Cook is due to bear down on the east coast of New Zealand from the Pacific later in the week.

With this in mind, Waikato District Council is informing customers that normally simple service requests may take longer than usual as its teams concentrate on assessment and repair of damaged roads, clearing slips and unblocking drains overwhelmed by flood waters.

The flooding also affected properties, which has meant Waikato District Council welfare teams have had to check on people and building inspectors have had to go out and ensure that the buildings are still safe.

The heavy rain has also affected water treatment plants in the district.

“Our teams are working incredibly hard to clear up and support the community after all the rain we have had over the past week. And with more rain forecast that work may continue for a couple of weeks,” said Waikato District Council chief executive Gavin Ion

“Staff have also been seconded to the Emergency Operations Centre (EOC) which has drained resources in other areas.

“With the forecasted bad weather, the EOC and many of our teams will need to stay on alert and be prepared to respond.

“All this means that some of the service requests we receive that are normally dealt with in a matter of hours may take longer than normal. We apologise for the inconvenience caused but we need to focus on keeping our communities safe.”

Meanwhile motorists are advised to take extra care on the roads over the next week. There is still significant debris and roads are slippery.

People are also reminded that if a road is closed to not attempt to go through it. There have been instances of people ignoring signs and putting themselves and others at risk.

For safety reasons, people are also advised that all walking tracks in the district, including the Hakarimata track, should be avoided until further notice.

If you are concerned about flooding or your welfare or the welfare of others, please phone 0800 492 452, or if you are in immediate danger call 111.

Should water levels rise and threaten homes, residents are urged to evacuate to higher ground and to notify Council as soon as possible.

Waikato District Council staff have been working hard to re-open roads like River Road in Tuakau, which was closed by a slip.

LIST OF AFFECTED ROADS AS AT 11 APRIL (Waikato District Council is aware of other issues on the roading network due to ex-Cyclone Debbie but this list includes roads that we have had the most enquiries about).