To flush or not to flush 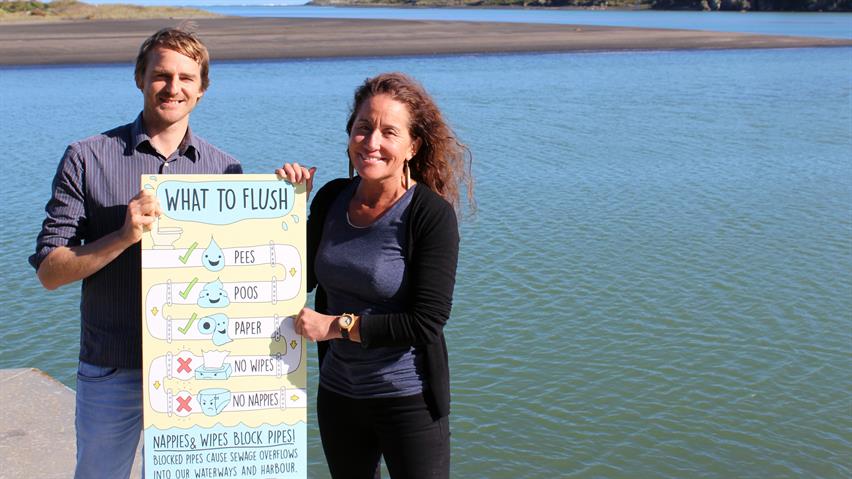 A pair of blue underpants has shown the importance of a wastewater system public education campaign.

As part of Waikato District Council’s Wastewater Overflow Continual Improvement Programme, an education programme is being run in Raglan, spearheaded by Raglan Councillor Lisa Thomson and the Raglan Community Board.

This campaign will be going district-wide as Council aims to support its communities to better understand what can and can’t go down the wastewater system via toilets, kitchen sinks, baths and showers.

A staggering 80% of wastewater overflows in the Waikato district from 2014-16 were caused by blockages.

Wastewater pipes are generally only 15-20cm in diameter and are clearly not designed to carry products like wipes, rags, nappies or in the case mentioned above, underpants.

Substances such as cooking oils and fats disposed of down the kitchen sink can solidify as they cool in the wastewater pipes and cause blockages.

Clr Thomson posted a photo on the Raglan Notice Board Facebook page last month of the underpants, which had caused a blockage.

She used the post to highlight the fact that the campaign focuses on only flushing the three Ps – poos, pee and paper (toilet paper) – down the toilet.

“This campaign is about being aware and taking positive action to combat spills and overflows into our precious environment,” she says.

“In Raglan, any overflows can directly impact our harbour. We are unable to collect kai moana, we can’t swim or do watersports and of course it has a huge impact on our business. We can all make a difference by simply following the three Ps.”

Clr Thomson has immersed herself into getting the message out there that the community can do their bit to help reduce spills, to the extent that she has gone out with Council staff to check wastewater pump stations, which she described as a stinky and ‘pooey’ experience.

“I got involved because I feel a deep sense of responsibility, not only as a councillor, but as a member of the Raglan community,” she says.

“I love our beautiful backyard and value our environment and feel this campaign is a very powerful vehicle to improve our behaviour and minimise spills.”

Community boards and committees are being briefed throughout the district on the public education campaign so that it can be adapted and used for their respective communities.

The campaign includes the use of fun graphics on posters, newspaper adverts, social media, stickers and other material to remind people what they should and shouldn’t flush down the toilet.

Material will also be produced highlighting the importance of disposing of other material such as cooking oil properly in the kitchen.

But in the meantime Clr Thomson encourages everyone to play their part in reducing overflows.

“Remember the three Ps – pee, paper, poo only down the loo!”