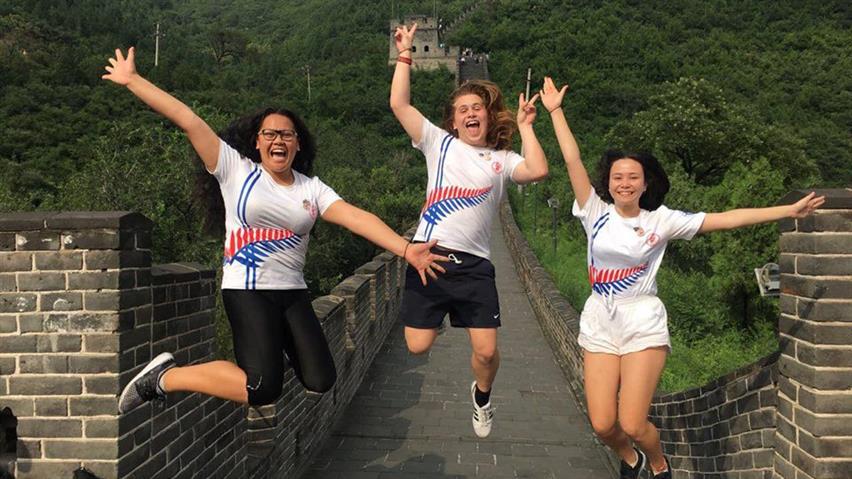 Three teenagers arrived back at school this week after the trip of a lifetime to China that they were supported to apply for as a result of joining a Waikato District youth action group.

After joining the Te Kauwhata and Onewhero Youth Action Group to develop their leadership skills, Marina Wihongi (from Meremere) Caleb Monk and Tuene Henderson (both from Onewhero) were encouraged by the Waikato District Council’s Youth Engagement Advisor Shannon Kelly to apply for a scholarship issued by The New Zealand China Friendship Society.

The scholarships, worth $2,000 each, allowed the trio to experience and learn about another culture first-hand as they travelled to China for two weeks to retrace the footsteps of celebrated New Zealand author and poet, Rewi Alley.

While learning about Rewi’s life-long contribution to the Chinese revolution (from 1927 until his death in 1987), his work in organising thousands of industrial cooperatives during the war against Japan, as well as his efforts in pioneering technical training schools in China, the teenagers also took in some of the famous cultural and historic attractions in China.

The Great Wall, Beijing’s Forbidden City, the Terracotta Warriors in Xi’an and Shanghai’s Pear Tower were all ‘must sees’, and learning about the lives of youth in China was a ‘must-do’ on their trip. They also spent time at the Rewi Alley Research Centre and museum at Lanzhou City University to learn about Alley’s impact on local people, and the relationship between New Zealand and China.

Tuene Henderson says, “We’ve been offered scholarships to attend Lanzhou University and this is definitely something I am strongly considering.

“I was so incredibly touched by the warmth, friendliness and the openness of the Chinese people.”

She says, “Rewi Alley’s philanthropic work has inspired me to want to do the same thing.  Help a country in need or travel to another country and experience the culture and life fully.”

However, she also feels grateful to come from a small and close-knit community after seeing Chinese cities teeming with millions of people.

Caleb described receiving the scholarship for the trip as ‘surreal’ and all three say it was an opportunity of a lifetime.

If you would like to know more about a Youth Action Group in your area you can visit www.waikatodistrict.govt.nz/your-district/youth-action-groups.

Photo caption: Pictured on The Great Wall (from left), Marina Wihongi (from Meremere), Caleb Monk and Tuene Henderson (both from Onewhero) are ‘up in the air’ over their trip to China.