Waikato District Councillors received a detailed report from Quotable Value (QV) this week on the district’s Rating Revaluation for 2017.

The rating revaluation figures compiled by QV show the total ratable value of the 31,271 properties within Waikato District Council is now $27.69 billion with the land value of those properties now valued at $17.12 billion. 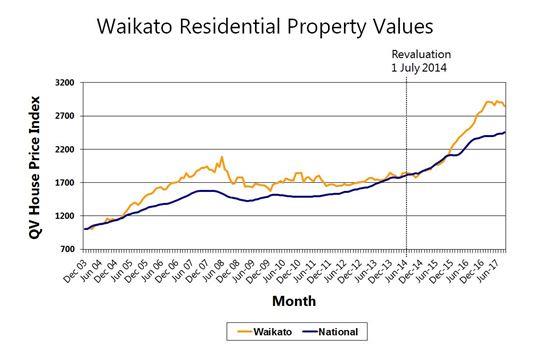 The Council reported last week that Waikato district property values had risen by an average of 33.7 per cent overall in the past three years.

QV Senior Consultant, Stephen Hare said, “Demand for housing and land for development in the Waikato has grown rapidly over the last three years following strong population growth and demand for property in both Auckland and Hamilton.”

“As a consequence Waikato is one of the country’s fastest growing districts. This was reflected in the volume of resource consent and building consent applications for new dwellings rapidly increasing throughout 2015 and 2016 and applications for these have only recently started to slow.

“This heightened activity and demand for property is reflected in recent sales and there have been significant increases in residential value levels over the last three years as a consequence.”

“There has been significant growth in Pokeno, Huntly and Te Kauwhata values but growth has not just been confined to the larger townships and value levels in small rural villages and settlements in the district have also increased significantly as well.”

Further information on how Waikato residential property values compare to other districts and to all of New Zealand can be found at www.qv.co.nz/property-trends/residential-house-values .

Waikato District Council’s General Manager Strategy and Support Tony Whittaker said, “A change in your rateable value does not mean rates for your property will change by a similar percentage.  The Council does not collect more rating income as a result of increased property values or less rating income if values decrease.”

Rating valuations are carried out on all properties in New Zealand, usually once every three years to specifically help local councils set rates for the following three year period.  Rating values are just one of a number of factors councils use to allocate rates.  Council rates will not be updated based on the new 2017 rating valuations until 1 July 2018.

The updated rating valuations should reflect the likely selling price of a property at the effective revaluation date, which was 1 July, 2017, but do not include chattels.

New rating values were posted to property owners from the end of last week [week ending 20 October, 2017]. If owners do not agree with the rating value they have the right to object. The objection close-off date is 24 November, 2017. To find out more about objection or to lodge an objection online go to www.ratingvalues.co.nz or call QV toll free on 0800 787 284.