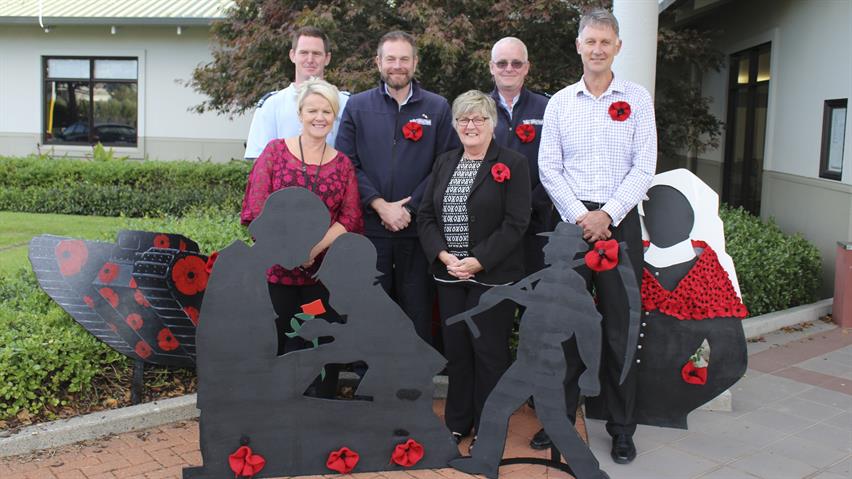 People wanting to see the ANZAC art installations in the Waikato district have until the end of May to view them.

Waikato District Council will not be removing the poppy ‘yarn bombing’ along the Te Awa cycleway at Ngaruawahia or an art installation at the Council until the end of May, and is encouraging groups who yarn bombed ‘poppy trees’ in 21 communities around the district to keep their decorations up until the end of May as well.

They include portrayals of a tank, ship and warplane representing the troops who served and died, and other silhouettes representing those who remained at home.  They are on display outside and in the foyer of the Council offices, where visitors attending meetings in the Council Chamber can also see a tree ‘yarn bombed’ with knitted red poppies.

The plywood silhouettes complement the Council’s district-wide ANZAC ‘yarn bombing’ street art project that encouraged community groups to knit more than 8,000 poppies to decorate trees in 21 townships around the district, and a one-kilometre stretch of the Te Awa cycleway and Perry Bridge in Ngaruawahia.  Waikato district school children also took part by knitting camouflage nets decorated with poppies to ‘yarn bomb’ two tanks outside the National Army Museum in Waiouru.  This art installation will also remain in place until the end of May.

Waikato District Council acting Chief Executive Tony Whittaker says, “The Council has welcomed the involvement of Spring Hill Corrections Facility in a project that has brought our communities together to create visual pleasure in our district and further afield.”

Corrections Instructor Andrew McBean says, “The prisoners were excited by the project and were able to demonstrate their artistic flair and contribute back to their community.  We have appreciated the opportunity to be part of this interesting local project which will enhance the skill levels of prisoners and help with their reintegration back into the community.”

Having a job reduces the likelihood of an offender re-offending and means they can provide for themselves and their family, connect with pro-social support and gives them a sense of pride. Engaging in employment and industry training such as carpentry, enables prisoners to gain real work experience and employment skills, making it easier for them to find work on release.