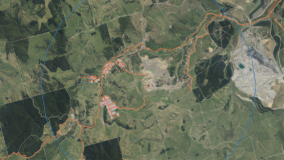 A precautionary health notice has today been lifted for residents living within three kilometres of Puke Coal’s construction and demolition landfill in Pukemiro. This follows evidence there is currently no active fire at or near the surface. A fire had been burning at the site since August.

Advice was sought from the Institute of Environmental Science and Research which provided a report (sourced from an air quality and emissions management specialist organisation), which included reference to a large fire in Canada around which increased levels of dioxins were detected in the environment.

Although initial indications were that the Puke Coal fire was not directly comparable, a health notice was issued on 14 November to the Pukemiro and Glen Afton communities, advising pregnant and breastfeeding women to remain at least three kilometres from the landfill site.

Waikato Regional Council Resource Use Acting Director Brent Sinclair, who is leading the multi-agency Incident Management Team, said issuing a health notice was a precautionary measure following advice from the Waikato DHB Public Health Unit and it would remain in place until environmental testing showed dioxin levels weren’t elevated or until the fire was out and no longer a potential risk.

In the last week, Fire and Emergency New Zealand have investigated the Puke Coal landfill and informed the IMT that there is currently no evidence that the fire remains active. Based on this advice, the precautionary health notice is no longer considered necessary. Monitoring of the site is ongoing and if any change is detected a further public notice may be issued.

It is now understood that the Puke Coal landfill fire was much smaller than the one in Canada on which Waikato DHB’s Public Health Unit (PHU) had based their precautionary health advice.

“This is good news and advice from the PHU is that any potential risk to health will have been significantly lower,” Mr Sinclair said.

Water sampling conducted so far has not identified any contamination considered harmful to health that can be directly attributed to the fire.  Those individual households who had water tested will be contacted to have their results discussed.

Additionally, New Zealand Food Safety conducted a food safety assessment, which showed it is unlikely residents growing food at home near the vicinity of the Pukemiro fire will result in elevated risk of exposure to contaminants. No evidence has been sighted to establish a direct risk to consumption of wild food sources, and there is no risk to the public through the commercial food supply.

Air and water quality testing is continuing around Pukemiro and Glen Afton and soil testing for dioxins will also be carried out in the coming weeks. The results are likely to form part of the ongoing investigation which means there may be restrictions on public release.

“However, please be assured that if we detect any levels which have potential health implications for anyone in the community, we will act quickly to make that information available and provide health guidance. In the absence of ongoing smoke or fumes being released into the air as a result of the fire the PHU has advised that any symptoms residents may have experienced due to these factors should quickly resolve,” Mr Sinclair said.

If people do have health concerns they can continue to phone Healthline on 0800 611 116 for free 24-hour health advice, see their GP or speak to their midwife. A GP can assess symptoms and ensure appropriate care. If a GP feels any ongoing symptoms or health concerns are related to the fire they will notify Public Health.

Mr Sinclair acknowledged the considerable stress the community had been under since the fire started. “This has been a stressful time for the people who live in this area, and so it was pleasing to hear the feedback from Fire and Emergency after their inspection that the landowner has worked on site to smother the fire through the placement of an earth cap.”

Formal investigation into potential breaches of the Resource Management Act (RMA) in relation to the landfill site continues.

The Incident Management Team was set up to understand and mitigate the risks on the community. The team is being led by Waikato Regional Council and includes Waikato District Council, Fire and Emergency New Zealand, the Waikato District Health Board and Waikato Tainui. WorkSafe NZ, the Environmental Protection Authority and Ministry for the Environment have also had some involvement.