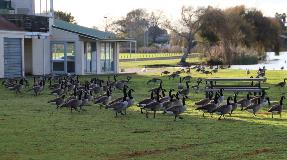 The lake sits next to Huntly Domain’s sports fields and the geese, up to 180 of them this past summer, are eating their way through the grass on the domain, the home base of Huntly Thistle Football Club.

A single goose can eat about 1kg of grass a day, roots and all, while producing up to 1kg of faeces a day.

As well as introducing weeds to the sports fields, that amount of faeces on the fields poses health risks to users of those fields.

Council has tried or considered various methods over the years, including:

These have not had the desired effect so, as a last resort, the eradication route is being taken.

Initially shooting was considered but will not be effective, especially at this time of year when geese are flighty.

The only option available currently is baiting. This involves hand-feeding the geese for several days. The food would then be mixed with the poison bait and fed to the geese.

The bait takes a maximum of half an hour to take effect, during this time the contractor remains on site to monitor the birds, tracking any effected birds that move outside the control area.

The contractor then immediately collects the dead birds for disposal. They undertake a second collection the next day to ensure no dead birds remain.

“This was a difficult decision for us to make and we sought input from the Huntly Community Board to ensure that they were comfortable with our decision,” says Community Connections Manager Megan May.

“The damage the geese do to the neighbouring sports fields means that we may have to spend up to $10,000 on re-sowing them if no action is taken, and the risk to human health for those using the fields is becoming too great.”

The culling of Canada geese is planned for the week of 14-18 June. The risk of the bait being consumed by other bird species is minimal as the geese will be hand-fed.