Apply for funding this summer for your community project 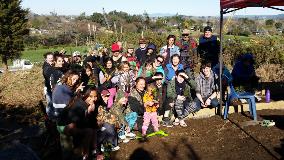 Applications are opening in December and in January for a range of Council-administered funds to support community projects and events in the Waikato district for next year.

Waikato District Council General Manager Strategy and Support, Tony Whittaker, says, “There are funds for supporting creative and performing arts, heritage, conservation and a range of other community projects and events – so get your thinking caps on and tell us what you need!”

The Waikato District Community Wellbeing Trust Fund has a single funding round for the year which opens on 26 January and closes on 30 March.

In the past financial year the Council committed grants totalling more than $750,000 for distribution to 160 community groups and charities throughout the district enabling communities to come together to meet local needs.

The Heritage Project Fund was a new Council initiative last year. Among the first projects it funded were heritage signs for Raglan and Te Kowhai, and restoration work on the exterior of the Tuakau Museum.

Go to www.waikatodistrict.govt.nz/funding to find out more.