Speed limits to be lowered in north Waikato 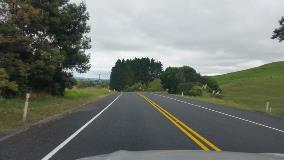 Speed limits on a number of roads in the northern part of Waikato District will change next month.

It follows the Councillors’ adoption of the amendments to the Waikato District Council Speed Limit Bylaw 2011 last month.

The amendments address high risk roads and were made under guidance from the NZ Transport Agency’s Speed Management Guide.

Assessment criteria used to determine roads that fall into the high risk category include: alignment; carriageway width; roadside hazards; land use; traffic volume; crash history and the suitability of the existing speed limit.

All speed limit changes to be made are reductions, the majority of them being on rural roads with the decrease being from 100kmh to 80kmh.

There will also be a reduction of speed limits to 40kmh on roads in the Pokeno Village Estate.

Other areas where speed limit reductions are to be introduced include Pukekohe South, Onewhero, Pukekawa, Tuakau, Mangatawhiri and Te Kauwhata.

The only rural road from the list on which the speed limit remains the same is the Tuakau Bridge-Port Waikato Road.

The speed limit on that road stays at 100kmh.

However Waikato District Council staff and NZ Transport Agency staff maintain that the road remains high risk with a speed limit of 100kmh.

For this reason, a series of interim safety improvements are planned for the road this year and the road will be looked at again in future amendments to the Waikato District Council Speed Limit Bylaw 2011.

Council will re-engage with the Port Waikato community to discuss any future speed limit changes on the Tuakau Bridge-Port Waikato Rd.

“Many rural roads in New Zealand are not fit for purpose with a speed limit of 100kmh. Any measure to control speed on roads is crucial,” says Waikato District Council Road Safety Engineer Gareth Bellamy.

“Excessive speed not only causes crashes but can also determine the outcome of a crash in terms of potential human casualties.

“You are much more likely to survive a crash at 80kmh than 100kmh and this is one of the main reasons why amendments to the bylaw are taking place.”

The new speed limits will come into force on 2 April 2018.

A list of roads with speed limit changes is at http://www.waikatodistrict.govt.nz/speedlimitamendments

Because of the sheer volume of roads assigned for speed limit amendments, roads in the Huntly, Hukanui-Waerenga and Ngaruawahia Wards will be addressed later this year, followed by the Tamahere, Raglan, Eureka and Newcastle Wards next year.